Diabetes Awareness Month: Pumps and bumps in the road 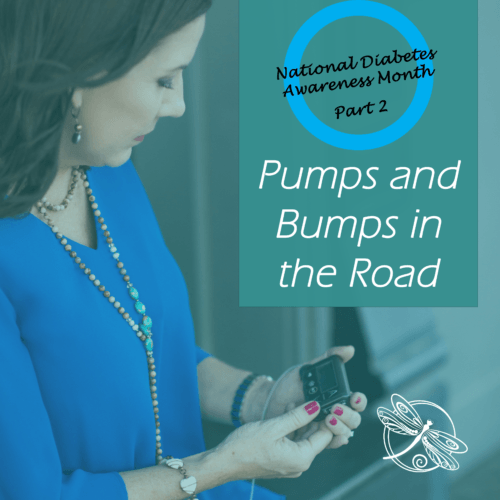 I was diagnosed with diabetes at age 26, working nights as an ER nurse at Baylor University Medical Center in Dallas .  This is my journey into insulin and pump therapy.

Nights meant I worked 7pm to 7am and slept during the day.  I didn’t recognize many of the typical symptoms of new onset diabetes because most night shift ER nurses are tired, have to pee and are constantly thirsty from not taking enough breaks!  Frankly, I was happy to be dropping a few pounds – perhaps the night shift agreed with me – fatigue and all!

Giving it my best “shot”

When the diabetes diagnosis was finally made, I started with the traditional combo of NPH and Regular insulin.  You take a single shot in the morning with short acting (regular) insulin to cover breakfast mixed with longer acting (NPH) insulin to cover lunch and your basic metabolic needs.  Repeat at dinner, but with less NPH – just enough to get you through the night.  The troubles were twofold 1) I worked nights – some days lunch was at 3:00 am and some days it was at noon.  2) Once you injected that NPH, it was going to kick in several hours later to cover your meal. If meal time happened to be while you were doing CPR or in a trauma case and you couldn’t eat, it still kicked in.  My blood sugar would plummet.

Trying to time how to take my shots on work days, vs non-work days was like decoding DNA.   Hit or miss with less than optimal results.  Luckily there were some new insulins on the market along with some new ideas about how to manage blood sugar.  Multiple Dose Insulin (MDI) was my next treatment method.

With MDI, I took two injections of Ultralente, which was a very long acting insulin. If NPH had the impact of a roller coaster, Ultralente was a pancake. One shot at 7am and another at 10pm.  This covered my body’s basic needs just to work (keep heart beating, cells growing, breathing etc) and  I had the freedom to take rapid acting insulin whenever I wanted to eat or to correct a high blood sugar.

This meant a LOT more shots, but no eating schedule, no unexpected drop in blood sugar if I didn’t eat on time.  MDI gave me the flexibility to inject insulin when I needed it, for what I wanted to eat.  It was pure genius!  I ate.  I calculated the dose.  I injected (anywhere and everywhere – no hiding in a nasty bathroom for this girl!).  It was the same routine whether I was up all night working nights or on off and awake during the day.

The downside was the variability in absorption based on how well I had shaken the bottle of long acting insulin and the site of the injection. And injections still meant you were committed to the dose for a long time.   I also HAD to be awake every day at 7am and 10pm – no matter what – to take the long acting shot and there were so many days I didn’t want to wake up to do it. But I made it work.

My doctor suggested a pump, so I could adjust real time and have more flexibility.  At the time, pumps seemed pretty big and I was not keen on having “something” hooked up to me 24/7.  Too many memories of patients hooked up to machines floated in my brain and I didn’t want “that”.    There was a lot of fear about having insulin pumping into me.  At work in the hospital, insulin dosing is taken very seriously.  You must have another nurse double check your prepared syringe to insure it is the correct patient, correct dose, correct route, correct time and correct insulin.  Any one of those factors is off and you can do someone some serious harm.  Now we are suggesting I have this infusing all the time??!! Even while I sleep?!

There were a lot of reasons for me to resist and I did.  My vanity may have been my biggest challenge as I was single and didn’t think any man in his right mind would even consider dating someone with “hardware”.  So for a while, I politely declined and continued the MDI therapy.

The person who gave me the courage to join the ranks of other pumpers has no idea how influential she was for me, although she likely knows she impacted many. When Nicole Johnson won the Miss America crown wearing her pump in 1999, it inspired me.  I figured “If she could hold her head high on that stage and not feel shame about wearing a pump, I could probably manage in my little circle of the world”.

So funny how this little gadget plays such a major role in my life, yet somehow the momentous date of our first meeting is lost to blurred memory. It was sometime in the fall 1999 because I was still working at Baylor.  That was one of the first major clashes I have had with the medical system and I was not having it.

In preparation for my transition to the pump, I had met with the diabetes educators for pump training and then my endocrinologist who would provide the “orders” so they could legally start me on this new insulin regimen. It was all planned for the next Friday as I wasn’t working.  All the I’s were dotted and the Ts were crossed and I was mentally ready to get this party started.  Cue the sound of breaks screeching.

The Monday before “pump day” I realized we hadn’t discussed what to do about my long acting insulin shot.  If I took it and then got plugged into a pump wouldn’t I be double dosing??  Should I not take it and just let my blood sugar go up until I got plugged in?  Time to put in a call to my endo!  His receptionist said she would pass the question on to him.  She calls me back the next day with the message “He will talk to you about it on Friday”.  What?  So do I take it or not?  I need the answer by Thursday not Friday.  So, I call again, and she was insistent that it could wait until Friday.

I felt so shut down and unheard.  In the 8 years he had been my doctor, I had never called once with a question, so it wasn’t like this was something normal. Going on a pump was BIG DEAL back then.  I was really nervous and needed some TLC.   My nurse ego was pretty bruised as well, since typically the “professional courtesy” rule applied, and you had more direct access to your colleagues.

As I was single and lived alone, I opted for going without the 7 am shot Friday morning.  Better to be a little high and take correction shots, then bottom out at home the first night of insulin pumping into me!

I arrive at the Diabetes Center, kit in one hand and full bottle of insulin in the other. “Let’s do this!!”  My fear pushed aside, by my anticipation and momentum.  I was ready to jump.  The look on my pump trainer’s face stopped me in my tracks.  She told me they never received the orders from my doctor and would have to reschedule.

Whaaat??  No way, I had confirmed they faxed them!!  I called and checked!  But there were no orders in the Diabetes Center.   OK, plan B.  His office is in the same building, I would just run up and get them signed.  Nope – his office was closed that day.  Ugh, plan C.  I am a nurse!  He told me the order, I can legally take a verbal order from a doctor.  Just need to fill out the form and sign like I would any other order!  Whew!  That should work.  But the educator was having none of it.

In retrospect, I think there was a bit of a power struggle within the organization and I was caught in the cross hairs.  She wasn’t budging.  She was being heavy handed to prove a point with the doctor.  Rescheduling was my only option.   I pleaded that I hadn’t taken my long acting shot and I really needed to go through with this. The thought of going through another week of anticipation and apprehension was torture.  But it wasn’t going to happen.

I was so angry.  All of this felt so unnecessary.  I was trained. I was ready. Why were these people standing in my way?  And then I felt control flow back into my soul. Wait.  I have the kit., I have the insulin. I knew what to do. I have the doctor’s orders.   The pump wasn’t that much different than IV pumps I worked with every day.  Decision made.   I am doing it on my own.

In the basement of Baylor in an office just off the ER, I programmed the pump according to what my doctor had told me.  I filled the syringe with insulin and verified the dose and attached the tubing.  Insulin into pump, prime tubing, no air bubbles.  Whoa that needle was a lot longer than my insulin syringes.  No turning back now.  Jab, remove needle, leave catheter, secure set with adhesive.  Connect tubing to port and I am now on an insulin pump. I did it!!!

Nineteen years later, I am still pumping.   I don’t regret the decision I made to take matters into my own hands. If everything had gone according to plan that day, the result would have been the same.  I started insulin pump therapy. Safely. Unless you are a trained healthcare professional and confident in your skills, I would never recommend doing what I did.  But I do strongly recommend that you always advocate for yourself and make sure your voice is heard.  You own every decision you make in your life.  Even when you are taking the advice of a trained professional, you own the decision to do it or not.  Never forget you have choice, use it intently and take care of yourself.