← Newsy Tuesday: Insulin Price Cap in Colorado -Who’s Getting Left Out? Inspirations - Every Day is a Gift →

Stories to Connect: Remembering Those Gone Too Soon 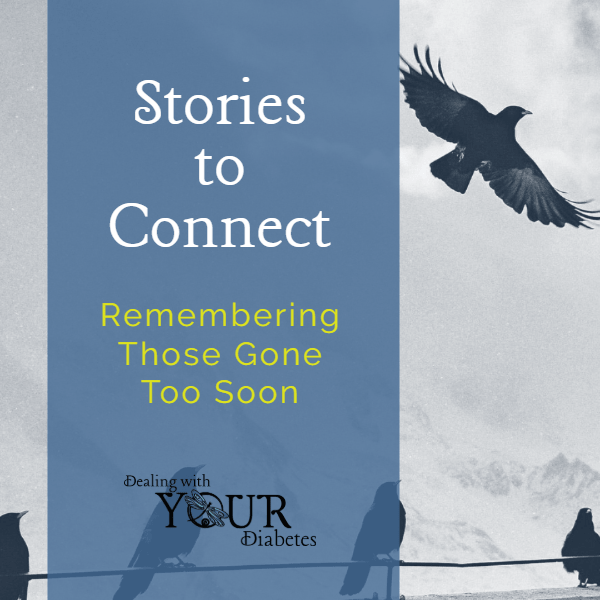 On the heels of Memorial Day, I think it is fitting to remember these souls who are gone too soon from diabetes, solely due to the cost of insulin.  In a country that provides free treatment to drug addicts and those with dire socioeconomic states, I am just asking for this life-giving insulin to be affordable.  I certainly don’t mind paying for something this important, but those in the middle suffer the harshest consequences.  Like me, we earn enough income and don’t qualify for subsidies, but our options for insurance are too costly and insulin too expensive so we pay full price.

One comment about old school insulins available at lower prices.  I would ABSOLUTELY use these products if that were the only option.  They kept me alive for years.  But that is a stop-gap, not a long term solution.  Newer insulins allow for better control.  Better control means fewer complications.   That is important.

The millions of dollars being spent for new treatment options each year become meaningless if PWD cannot afford to use them.

From Right Care Alliance – Lives Lost in Past 2 Years

In the past two years, the type 1 diabetes community has lost at least six men and women to insulin rationing, because they could not afford to buy enough insulin. Here are their stories:

Meaghan Carter, age 47 (December 25, 2018) — Meaghan Carter had type 1 diabetes for 18 years. When she lost her job and insurance, she struggled to afford her insulin which cost more than $800 a month. She resorted to buying NPH insulin (intermediate-acting insulin) from Walmart, which is cheaper but much more unpredictable than the insulin she normally used. On Christmas Day, 2018, Meaghan died of diabetic ketoacidosis, one day before she would have received a paycheck that could have saved her life.

Micah Fischer, age 26 (November 4, 2018) — Micah aged off his father’s insurance plan in June of 2018. His new insurance did not cover Humalog, the insulin that worked best for him and was recommended by his doctor. It would cost $1,200 out-of-pocket. Micah rationed his insulin and go without eating so that less insulin was needed. He was excited to start a new job in October with an insurance plan that covered the insulin he needed, but the plan had a one month waiting period. He only had two and a half weeks to go until his new insurance kicked in when he died.

Jesse Lutgen, age 32 (February 7, 2018) — Jesse was diagnosed with type 1 diabetes when he was 12. Jesse had no problems with his diabetes as a child, but as an adult, the high cost of insulin and supplies became his largest financial problem. When Jesse lost his job in November 2017, it became even harder to manage his diabetes. He had made too much money that year to qualify for Medicaid, and the cheapest insurance available had a $10,000 deductible. He decided to pay out of pocket for insulin, but resorted to rationing because the out-of-pocket cost was so high.

Alec Raeshawn Smith, age 26 (June 27, 2017) — Alec Smith was diagnosed with type 1 diabetes at age 23. When he turned 26 he was no longer able to be covered under his parents’ health insurance. Alec made too much money to qualify for Medicaid, but his job did not provide insurance. The cheapest insurance plan had a $7,500 deductible, so he decided to go uninsured. He was paying $1,300 a month for insulin and supplies, almost half of his salary. He died on June 27, 2017, from diabetic ketoacidosis, less than one month after going off of his mother’s insurance.

Antavia Lee Worsham, age 22 (April 26, 2017) — Antavia struggled to afford insulin when she turned 18 and was no longer eligible for insurance coverage through the state. She had resorted to borrowing insulin from others, changing her diet, and rationing insulin because she couldn’t afford it. Her insulin and supplies cost $1,000 a month. Her brother found her dead from diabetic ketoacidosis on April 26, 2017.

Shane Patrick Boyle, age 48 (March 18, 2017) — As a comic book writer, Shane had struggled to afford insulin, but received help from friends and his community in Houston. When he went to visit his dying mother in Arkansas, he had no way of buying insulin. In February 2017, Shane Patrick Boyle started a GoFundMe campaign to raise money for a month of insulin. He was $50 short of the amount he needed and died from diabetic ketoacidosis on March 18, 2017, a few days after his mother died.

← Newsy Tuesday: Insulin Price Cap in Colorado -Who’s Getting Left Out? Inspirations - Every Day is a Gift →