Sugar – Enemy #1 for Diabetics and Everyone Else 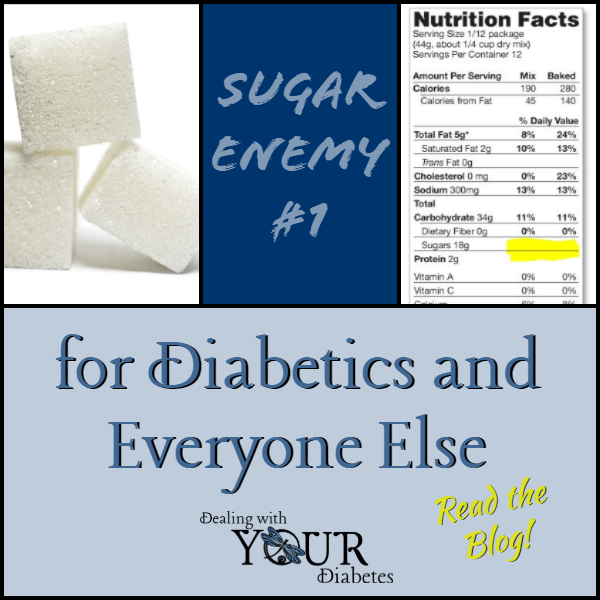 I have been reading a lot of information lately about Metabolic Syndrome (MetS).  It is a set of physical findings common among people with diabetes and heart disease.  It also puts you at high risk for stroke.  The term has been around as long as I can remember, but in my practice I remember it more along the lines of out of control obesity.  It was almost as if metabolic syndrome was the cause of these problems.  Today’s science is revealing much more information.  There is a great deal of political correctness, but it seems like MetS is pretty much caused by sugar! And MetS is the precursor to most everything you can think of – diabetes, cancer, heart disease, liver disease and Alzheimer’s.

As obesity and diabetes rates skyrocket at an astronomical pace, attempts at weight loss seem to be failing for many people. Apparently the “calories in/calories out” mantra that was pounded into our heads, isn’t the solution, nor is it avoiding fats.  The culprit seems to be sugar and it likely no accident.  Much like tobacco and nicotine in its day, sugar is the new big business, big government secret.  There are ample studies that show the caustic nature and inflammation excess sugars incur on the body.  Yet sugar is everywhere.

I remember back to the time just before my diagnosis, being THRILLED to find out carbs were not bad!  Pasta and potatoes for everyone!  Douse it in some fat free anything and you had yourself a healthy meal.  I think back no and cringe at what I ate!  I am sure those carby meals contributed to my pre-diabetes, rapid weight loss, maybe even shortened my “honeymoon”. Who knows??

Just a few years ago, after I left my corporate job and was able to spend more time in my kid’s elementary school cafeteria,  I was FLOORED by what they were serving. Bread, potatoes, milk, ice cream, cereal, pizza, and racks of “snacks” near the cashier.  There was so much “white” food.   A big carb-fest full of sugar.  I had been paying for “hot lunch” because I thought it would be more balanced than a sack lunch!  That changed quickly.

I certainly understand the difference between Type 1 and Type 2.  Type 1 is an auto-immune disease and Type 2 is caused by insulin resistance with a strong correlation to MetS.  But I am seeing more posts on social media about 1’s developing insulin resistance and/or Metformin being added to the T1D regimen.   It makes me wonder, as a Type 1,  since I can bolus and eat pretty much what I want, if I  that extra insulin and sugar might be more sinister that I think, despite the fact that I keep in range?  I am still conservative when it comes to sugar, but I am not opposed to deserts every once in a while.  Is that too much?

I still believe that all things in moderation are the best way to go.  But I find myself less and less willing to eat fast food or “breakfast bars” which were an easy breakfast choice.   Having the carbs on the side of the box makes for easier dosing!   But now every time I look at the box, I notice the grams of sugar are listed, but not the percent of daily allowance.  My eyebrow goes up.  The US Recommended Daily Allowance (RDA) for s sugar is 25 grams a day (for a typical 2000 cal diet). But labels don’t show the percentage, just the raw value in grams.  It is the only item listed this way.   Hmmmmmmm,,,,,,,,,,

A juice box has 23 grams in one box.  Obviously it’s necessary to treat hypoglycemia, but it had never occurred to me that a little box could use up nearly your daily allowance for sugar!  It is amazing how sugar has snuck into every aspect of the food we eat and is so heavily promoted in ad campaigns.  We are constantly bombarded!  No wonder it is so hard!

And for the final kicker, sugar is addictive.  Studies show that some people’s brains and behaviors on sugar, mimic those of those people with addictions.  So our brains light up on sugar, it is pervasive in our food source, we are bombarded with advertising and it is caustic to our bodys, whether we are diabetic so not!  Only time will tell if it will go the way of tobacco.  In the meantime, be mindful of those food labels!