What’s Going On With Insulin Prices? 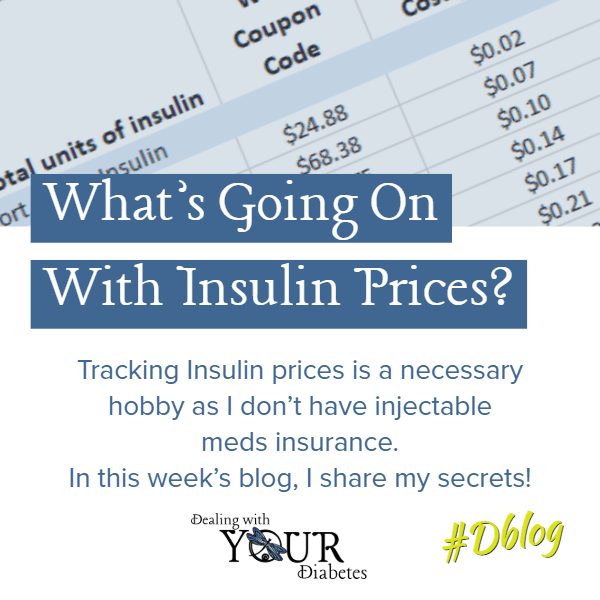 Insulin pricing weighs on my shoulders. A lot. When I was first diagnosed, a vial cost a lot less than $20. It was such a nominal price, I can’t remember what it was. Nearly 25 years later as I left my corporate job, the sticker shock nearly knocked me down. Almost $300 for a vial without insurance! I knew the price of insulin had climbed,. But I was sheltered by my big company insurance and frankly, wasn’t paying attention.

My dance with insulin prices

To be fair, the insulin I use today is not the same as the type I started with. I started on Humulin N & R, commonly referred to as “Walmart Insulin” and it is still available today at a very reasonable price. About 5 years after my diagnosis, a new and improved insulin called Humalog (Lispro) was introduced to the market. It made the timing of injections before meals much easier since it was faster acting. And thanks to recombinant DNA and some lab bacteria, this new insulin was as close as we can get to what my body actually produces. It cost $21. This is still my preferred insulin and I use it in my pump. Last year that EXACT SAME insulin, unchanged from 1991 costs nearly $300. Stats online site the price is 8X the original price, even when adjusted for inflation.

With prices like that, sourcing my insulin has become a bit of a hobby. I have found websites, apps, coupons, and discount programs that help defray the cost. My favorite is www.CanadianInsulin.com and the GoodRX app. Canadian insulin is far less expensive than the EXACT same stuff here in the US and with quick upload of a scanned copy of your prescription, they are happy to ship it to you!. GoodRx, can find the lowest prices in your area and gives you codes for the pharmacist to dramatically slash your price. I love to play with numbers so I created this graph with the lowest insulin prices offered on GoodRx in the DFW area for common insulins and then adjusted to compare the cost of 1 unit of insulin. 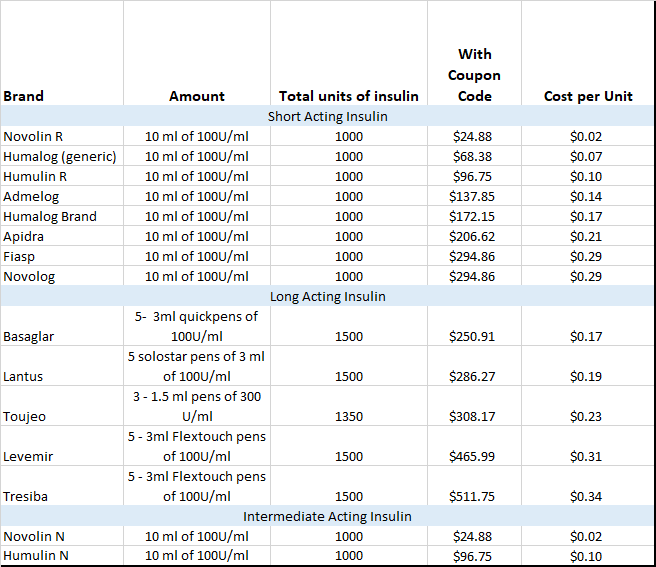 By breaking it down to a per unit cost, you can easily see the variability in pricing. Humulin N & R (Walmart insulin) is the lowest at 2 cents a unit, while newer long acting insulins such as Levemir and Tresiba are over thirty cents a unit. With a coupon a vial will set you back about $25.

According to this nifty online tool, if insulin cost me $15 in 1991 (and it may have been less, I just can’t remember), it should cost $28.80 in today’s dollars. So not that far off for a product that hasn’t changed. My Humalog that cost $21 in 1996 and hasn’t changed in composition, should cost $34.28 in today’s dollars. Yet the best you can do is twice that amount with this discounted generic version (at $68.38). The same name brand Humalog runs you 5 times as much ($172.15). Remeber these are all discounted prices with GoodRx coupons, not the list price.

A Harvard Political Review reported that it costs $5/vial for research, development and distribution of insulin. That is $0.005 or 5 one hundredths of a penny. At the lowest cost I could find online Novolin R at $0.02 (2 cents) a unil. That is a mark up of 300%. If you go with the highest discounted price per unit (Tresiba at $0.34), it’s a 6700% increase. Help me if I am doing the math wrong. It doesn’t seem fathomable. If you look at list prices that Humalog ($29.52/unit) the mark up is 590,500%. I completely acknowledge this is not a scientific research project, just some number crunching on my part using Humalog as a baseline for comparison. But wow oh wow!!! 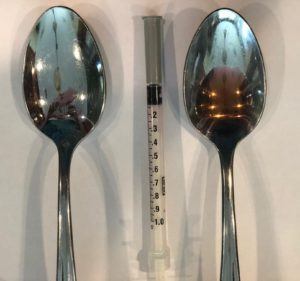 I milliliter of insulin

As a point of reference, a unit of insulin is one-one hundredth (1/100) of a millimeter (ml). In this image, the spoon on the right has 1 ml of colored water. The spoon on the has 1/100 of a ml or 1 unit. A unit is so small it’s hard to even see in the spoon (and my amature photography iphone skills don’t help!). The syringe is marked in tenths of units, so to draw up 1 unit, you pull the plunger back 1/10 of the distance between the base of the syringe and the 0.1 line.

You can’t really see that line because of the plunger, but you get the idea of how small the tenths with the distance from 0.2 to 0.3. It’s an itty, bitty, teeny, tiny drop.

The Cost of Life

I am fortunate to still be very sensitive to insulin as most people take a lot more than I do. Some up to 100 U/ day. At that rate, just using Humalog pricing of $0.17, the daily cost is $17 and annual cost is $6205. If you have a high deductible plan of $6K, insurance will pay the remaining $200 when your deductible is met. Gee – Thanks.

I often find that people are NOT using these coupons and paying full price until they meet their deductible since this is what the insurance plans infer. You are to pay out of pocket until you meet your deductible. I do know many plans have discounted rates if you use the “preferred brand“, which may or may not be what works best for you.

Paying list price for Humalog will set you back $295.29 for a single vial (or $29.53/ unit). For the person using a 100 units a day, the price skyrockets to $2953/day or $1,077,845/year. That’s over a MILLION dollars! Thankfully most plans have an out of pocket max you have to pay, but come on! If they have a max where they are still making money, why is it necessary to have the price that high to begin with?

Any questions on why people are rationing insulin, staying in jobs they hate and planning their lives around insurance plans? Everyone needs to be sourcing their insulin with these discounts. My gut says, many don’t know how to navigate the system and feel they have no options, so they pay and pay and pay. Or stay and stay and stay in places they would rather not be.

All indications point to US insurers and pharmacy benefit managers system’s of rebates and preferential drug promotion as the reason for the price hikes, not the cost of R&D and distribution. They charge so much because they can. Morality aside, it is currently legal for them to do this! I say frequently that we have the BEST healthcare in the world, but the worst insurance regulations. As we chase personal health data, improved outcomes and cost containment, the tail wags the dog, as the crazy rules and complex submission, reimbursement and requirements set forth by CMS are subjective, open to interpretation and fraught with loopholes that allows these practices.

Wikipedia sums it up better than I could. US insulin is exponentially more expensive than in other places in the world:

In the United States the unit price of insulin has increased steadily from 1991 to 2019.[64] It rose threefold from 2002 to 2013.[65] Costs can be as high as US$900 per month.[65] Concerns were raised in 2016 of pharmaceutical companies working together to increase prices.[65] In January 2019, lawmakers from the United States House of Representatives sent letters to insulin manufacturers Eli Lilly and Co., Sanofi and Novo Nordisk asking for explanations for their rapidly raising insulin prices. The annual cost of insulin for people with type 1 diabetes in the U.S. almost doubled from $2,900 to $5,700 over the period from 2012 to 2016.[66]

Changes, a good start, but still missing the mark

And thanks to grass roots groups like #insulin4all raising awareness, our legislators are asking for answers from the big three manufacturers: Eli Lilly, Novo Nordisk and Sanofi. And changes are happening, yet to me it seems like more insurance shenanigans than bringing down the list price of insulin.

Earlier this year, Lilly introduced a lower priced, generic version of Humalog (Lispro) at half the cost of the branded version. It’s a head scratcher to me how same manufacturer can change the label but not the drug (“it’s the the same molecule as Humalog”they sat) and miraculously the price plummets.

Colorado has created a limit on the price of insulin and President Trump is calling for Favored Nation Pricing, but both movements are ONLY for people with insurance. In Colorado, the legislation only applies to “covered drugs”, meaning the insurer is limited to what it can charge to the insured. In Trump’s executive order, it stands to reason that it can only apply to what the US can negotiate for Medicare and Medicaid, but not what the manufacturers can charge to any Joe on the street.

So it’s a big step in a the right direction, especially if you have insurance, but for those who can’t afford these plans it seems we aren’t covered. Time will tell. But success begets success and momentum is never a bad thing. For now, I am still a big fan of Canadian insulin prices, although generic Humalog is certainly becoming a more viable option. Use those coupons people!! Never pay full price!

Having trouble figuring it out? Let’s chat! I offer a free 30 minute intro session! Sign up HERE