← Celebrate Freedom: Dealing With YOUR Diabetes What's Going On With Insulin Prices? →

My Diaversary- Insulin Dependant the Day After Independence Day 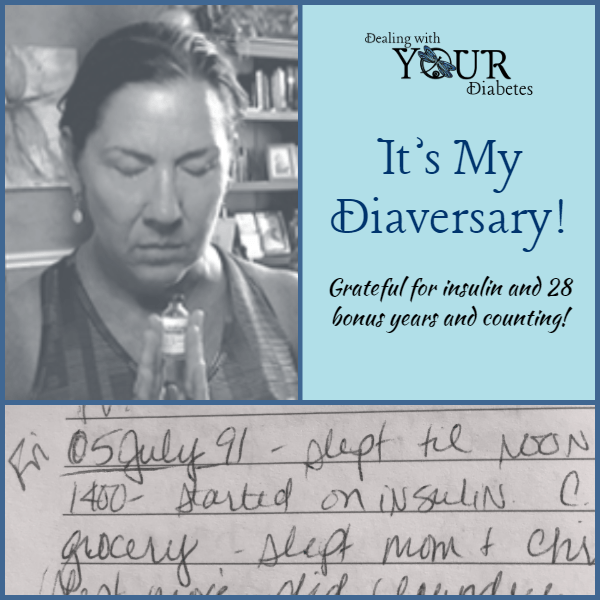 Not too long ago, I found an old journal that recorded that day.  Such a momentous occasion was captured in only three words. Started on insulin.  It was mixed in among notes about when I slept, chores and who I had talked to.  Several things strike me when I re-read this small blurb, that day contained so much more than those few words.

I mentioned sleeping three times that day and I remember the crazy, bone weary fatigue.  No matter how much I slept I was still tired. Initially I didn’t pay it much attention. I worked nights (7p-7a) and was always tired.  I remember keeping track of my sleep because it was such a focus of my life.  When you work nights,  you have to plan when you will sleep during the day. It falls into your routine just like planning meals.  But after awhile, it became too much and I reached out to my PCP.   Since I was an adult, I was started on oral hypoglycemics, but they didn’t appear to do much.

My cryptic handwriting in my journal that day says “MD appt” and I was seeing my endo that day.  When I initially saw him, he confirmed Type 1 and noted I was in my honeymoon period. Even thought I was not in need of insulin yet, I would be eventually. July 5, 1991 was that day. I was ready. I wanted it. If insulin would give me my life back, then ok.  I would do it.

I remember driving alone to that appointment.  I knew I was on the freeway doing 65 mph, but I so just wanted to close my eyes.  It took all the will power I had to focus on the road and driving 12 miles to his office.  The thought of injections really didn’t seem like that big of a deal anymore.  When I first met with my endo, I was so skeptical thinking the diagnosis was wrong and my mind was determined that I would NEVER take insulin.  But on that day, there was nothing I wanted more.

At the appointment, he confirmed I was ready to transition to insulin, but he wanted me to go to training at the Diabetes Center.  Another week was too much to bear.  I pleaded with him to let me inject myself.  I was very skilled in insulin administration, had been doing it for years on my patients.  I reminded him, that had he called me in the ER 24 hours earlier while I was working, he wouldn’t have thought twice about me giving insulin to one of these other patients. He agreed. He must have given me some samples, because I don’t remember buying insulin, just syringes.  Over the counter, with no prescription.  I soon learned, that I didn’t even need a prescription for insulin and it was dirt cheap.  My how times have changed!

I gave myself insulin that day, but I hardly remember it. That day I was so tired, I just wanted relief.  My brain was on auto-pilot as I sat alone in my kitchen floor and found a place on my tummy, stabbed and squeezed.  Looking back, I see a rebellious young woman who didn’t want to be a bother to anyone and had to prove she could beat this thing.  It could have been a perilous decision to be alone that day, obviously I wasn’t thinking clearly. There were many times, when injections were much harder and I couldn’t make my hand do what my brain knew it needed to do.  Lot’s of tears, fears and frustration.

I did eventually stop by the diabetes center to be ‘officially” trained on insulin injection.  The poor nurse who had to train me using an orange, was fresh out of nursing school and I ended up showing her a few tips! Ha!

Diabetes continues to be a source of irony for me.  My new grad nurse “teaching me how to give insulin”. Getting diabetes despite no family history. Too many snafus and gaffs to count about accessing supplies, insulin and insurance nightmares. And best of all, becoming insulin dependent the day after Independence Day. The 4th is a time of gratitude for the freedoms we enjoy in this great country.  Even though I am not free from insulin, I am free to make choices and free to choose my attitude.

Today I am grateful for the insulin that keeps me going and every additional day of life it has extended to me.

← Celebrate Freedom: Dealing With YOUR Diabetes What's Going On With Insulin Prices? →