← Newsy Tuesday: Is it too good to be true? Smart Insulin! Video Chat: What Does a Diabetes Coach Do? →

Stories to Connect: Ever Fire Your Diabetes Doctor? 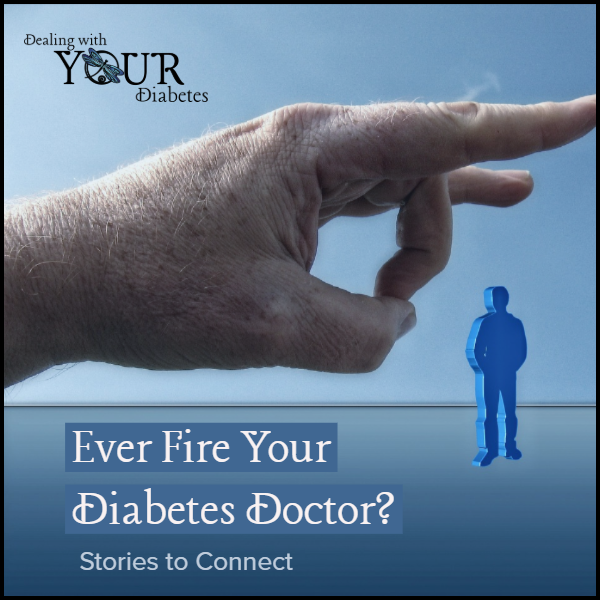 I must admit, I have fired several of the doctors who were supposed to manage my diabetes.  None of them for their lack of clinical skills, but all of them for their lack of respect and understanding.  I am fortunate to live in a big city with thousands of doctors and realize not everyone has that luxury.  I also realize that being in the medical field changed my perspective about these human beings that became doctors.  They are just that – people like anyone else. This week I thought I would just share a few stories about “What made me fire my diabetes doctor”.

The first provider I said goodbye to was absolutely the hardest as he was my first endocrinologist.  Things were fine for the first 8 years.  I just needed help with insulin dosing and a prescription (although at that time I could be it over the counter, my how times have changed!).  I had excellent clinical skills to manage injections and finger sticks and I had the pathophysiology down pat.  My trouble started the week I went on a pump. We were set up for a Friday because that was my day off.  Thinking back, probably not the best day to initiate a continuous infusion of insulin with limited access to providers over the weekend AND I was single and lived alone.  But that was what we did!

I realized at the beginning of the week, that we never discussed what to do about my long-acting insulin.  If I took it on Thursday, it would still be working on Friday which could mean hypoglycemia.  Living alone, I didn’t think that was a good idea. So I did what a good patient does, I called.  His office manager informed she would let him know.  I didn’t hear back. So I called the next day.  She informed me that he would make sure the pump orders covered it.  But wait!  I need to know what to do on Thursday, please ask him.  And the same response.

I was very concerned about running low, so I opted not to take my long-acting and figure it out.  I end up going on the pump on Friday (another story for another day) and survived the weekend.  On our next appointment, I was ready to hear him explain.  His plan was to titrate my basal rate as the insulin wore off. Ok so that would have worked, but his orders never made it to the Diabetes Center so it was a moot point.  My point to him was that I had never called him once in 8 years.  I was a well-educated nurse, not a bother, so it should have alerted him that I might need his attention.  He apologized profusely, but after that, I didn’t trust him.  If he wouldn’t call me back the week I am going on a pump, what would he call me back for?   That was my last appointment.

I saw another very high profile endo who had written a zillion papers. She was into research and I had data for days.   We have a saying in the medical field, “If it’s not documented, it wasn’t done”.  The nurse in me was compelled to document! I had glucose logs & food journals with estimated and known carbs, exercise, sleep patterns (still working nights), and every other data point I could gather.  My numbers were a little erratic, but I was working nights and lived a much more wildlife than I do now.  I was sure this expert would make some sense of everything and hoped she would be encouraged that I had so much information.  Not so much.

She perused my reports, said I was non-compliant and had too many “dietary indiscretions”.  She was a big fan of a very strict diet, with no flexibility.  I tried perfection.  I really did. Stayed home.  Ate in.  Exercised religiously.  Gathered even more data.  My A1c dropped a few tenths, but there was no pleasing her.  I realized she is good at managing the numbers of my disease, but the messy personal side would not be tolerated.  I felt like a failure every time I saw her.  That was not a happy time.

The last endo I saw took me through the Meaningful Use years.  You may have noticed about 2010 new standards and data collection began to happen. My appointments were scheduled every 4 months, even when I didn’t need anything.  When I asked, I was told ‘The doctor needs to see you’, but no good reason why.  I needed the insulin, so I complied. An electronic medical record was introduced along with a series of questions, lengthy discharge paperwork, and screenings!  I have been screened for Ebola too many times to count!  My visits became less about what I needed and more about what the doctor needed.

I was working in healthcare IT at the time and was Oh so familiar, with these new medical record guidelines.  I realized I was a “good” patient to have because my lab tests were good and it would reflect very nicely on the practices “clinical quality measures”.  I began to feel like I was paying a copay so they could collect data.  When I finally had the courage to say something,

I asked to cover my questions before I answered their questions.  I asked what other patients in the practice had been doing that was working well?  What pumps were preferred?  Pros and cons of CGM? I was politely told that due to HIPAA, they couldn’t share that information and it wouldn’t be fair to the pump companies to comments on their products.  Wait! What?  I am seeing you for exactly that sort of expertise and guidance! I tried another question.  “So what is new in the world of Type 1?  Any promising new therapies?”  The reply….”well I have been on vacation and haven’t been thinking much about diabetes lately”.

There are other stories, but these suffice to make my point.  If you have diabetes, you DESERVE a provider who can meet you where you are and work to find a plan that makes sense for your life and your needs. I realize that is not possible for some due to location and access.  But try if you are not happy.  You have choices.  Not every choice, but if you look, there might be options.  Telemedicine is opening up access like never before.  Diabetes is a self-managed disease which means you are the one making the decisions a thousand times a day.  Not every provider is a good fit.  It is definitely a process and different people need different things.

At this point in my life, I am stable with an A1c that would make you proud!  And my doctor is a local family practice physician who is my collaborative partner.  He is a great listener and would never hold me hostage with an insulin prescription. I hope he doesn’t retire any time soon!

Have you fired your provider?  Let me know your story!

← Newsy Tuesday: Is it too good to be true? Smart Insulin! Video Chat: What Does a Diabetes Coach Do? →